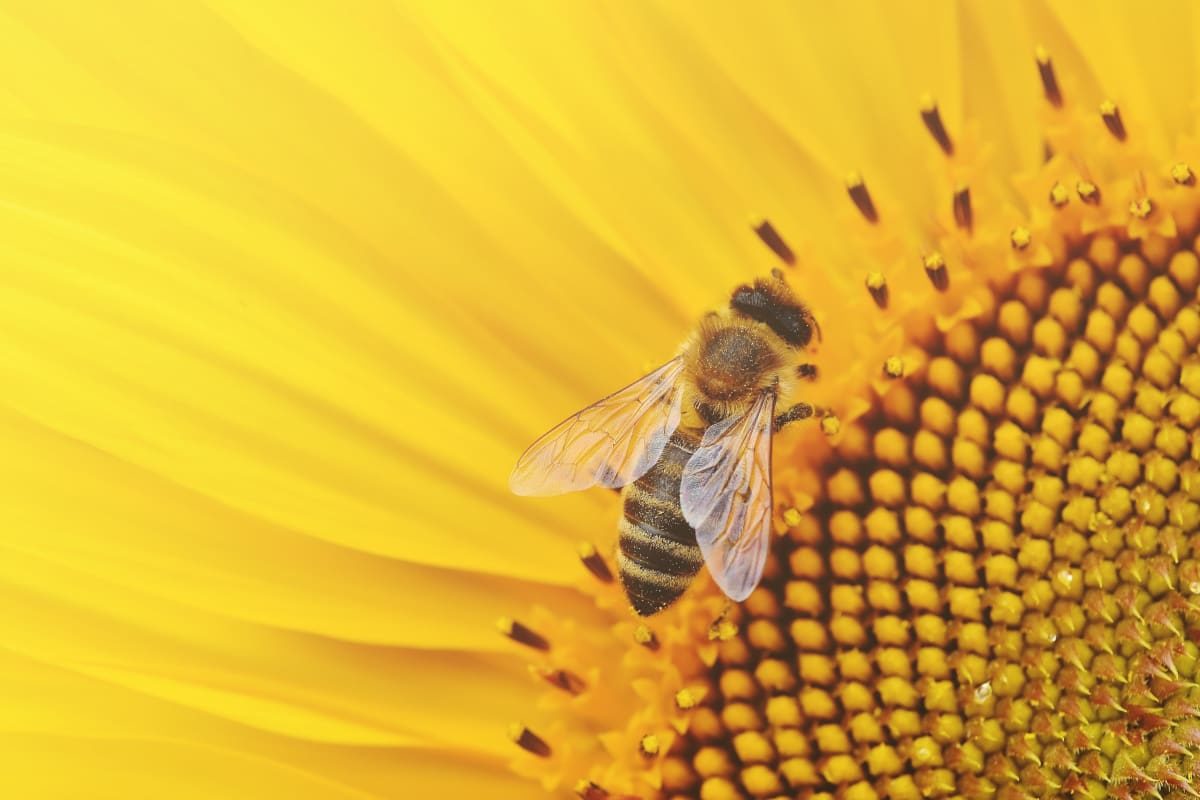 CEO and Co-founder Marc-André Roberge launched Nectar to improve human-bee interactions for beekeepers and growers to optimize pollination supply chains. They use precision beekeeping technology to measure data within a hive with their Beecon (the bee-friendly sensor device), BeeHub (receives and transmits the data) and BeeTag (the visual representation of the colony).

Nectar gives bees a voice and beekeepers the power to more efficiently detect colony threats. With this one device, they are able to read the temperature, sound, humidity and position of a hive. They can tell if a hive is queenless before it is too late to requeen and save the colony.

The technology helps growers evaluate the impact their agricultural practices have on the health of the surrounding biodiversity. Monitoring honeybees opens the door to monitoring the health of unmanaged insect species like wild bees and butterflies. It’s a dataset with the potential to push for change in agricultural practices to sustain biodiversity.

A third of the food we grow depends on honeybee 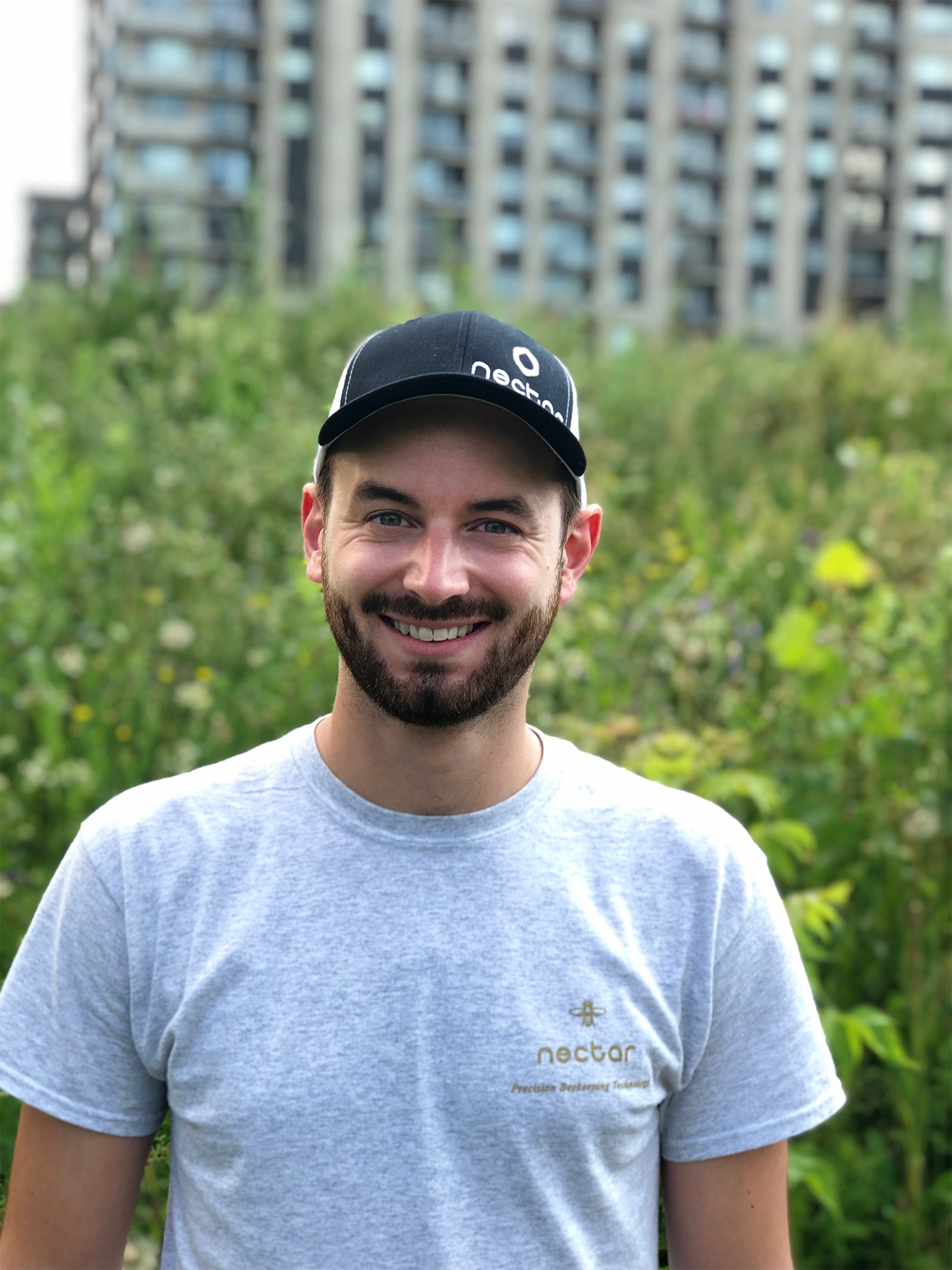 pollination—our apples, almonds, blueberries, broccoli, cherries, lemons, avocados and more. Honeybees are considered to be bioindicators of their surrounding biodiversity, so their health (or demise) causes a chain reaction in the biosphere. The beekeeping industry loses about 40% of their honeybee colonies annually due to a variety of reasons (from parasites to climate change) making the job increasingly more expensive in the fight against an ever-growing hostile environment. During his first season beekeeping, product designer and Google’s 30 Weeks alumni Marc-André Roberge, realized he needed a device allowing him to see and hear inside his hives instead of constantly guessing what was going on. Roberge went on to co-found Nectar, a precision beekeeping technology with a mission to secure the world’s pollinated food supply. They help commercial beekeepers raise healthier colonies, provide growers analytics to optimize their pollination supply chain and provide agri-food stakeholders with data to better support biodiversity. Using their Beecon, BeeHub and BeeTag, Nectar is able to gather data and interpret the hive’s health, behavior and strength. For instance, it can detect specific changes in temperature and sound very fast to determine if a hive is queenless, giving beekeepers enough time to requeen and ultimately save the colony. So far, Nectar has launched field trials with select commercial beekeepers across North America, and currently has space for a few more partners for the 2020 field trials. 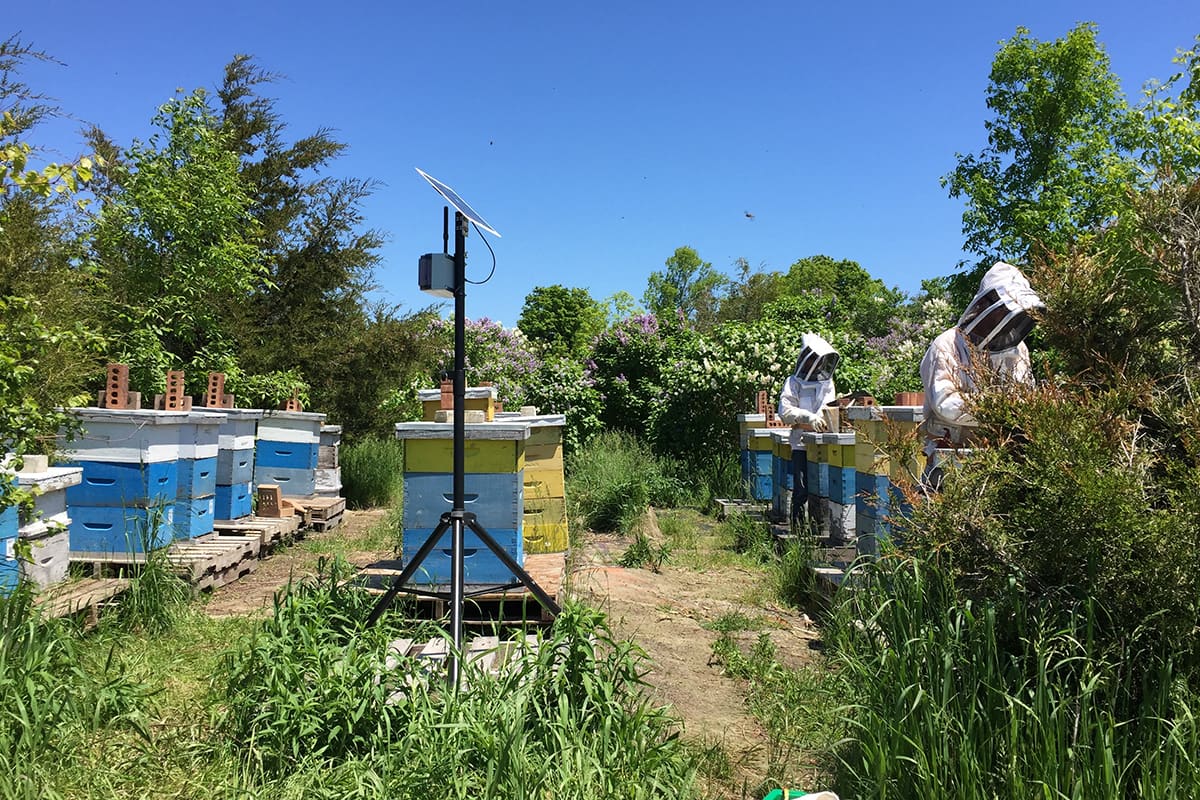 What led you to beekeeping?

I started my beekeeping journey by working on honeybee-related product design projects. As an industrial designer by trade, I got really passionate about creating products built around the social aspect of bees and, more specifically, the interaction between honeybees and humans to form a symbiosis where both species gain from the relationship.

I wanted to dig deeper into this interaction, which led me to start beekeeping myself. As a beginner, keeping honeybees healthy is hard. Even if I had great mentors and had read tons of books to teach me how to manage honeybees, in practice, opening hives can be overwhelming. I found myself facing a steep learning curve in order to take the right action at the right time to keep the colonies healthy. It was during that first season I realized I needed a tool that would enable my bees to tell me what care they needed instead of me trying to guess everything—a honeybee language translator! 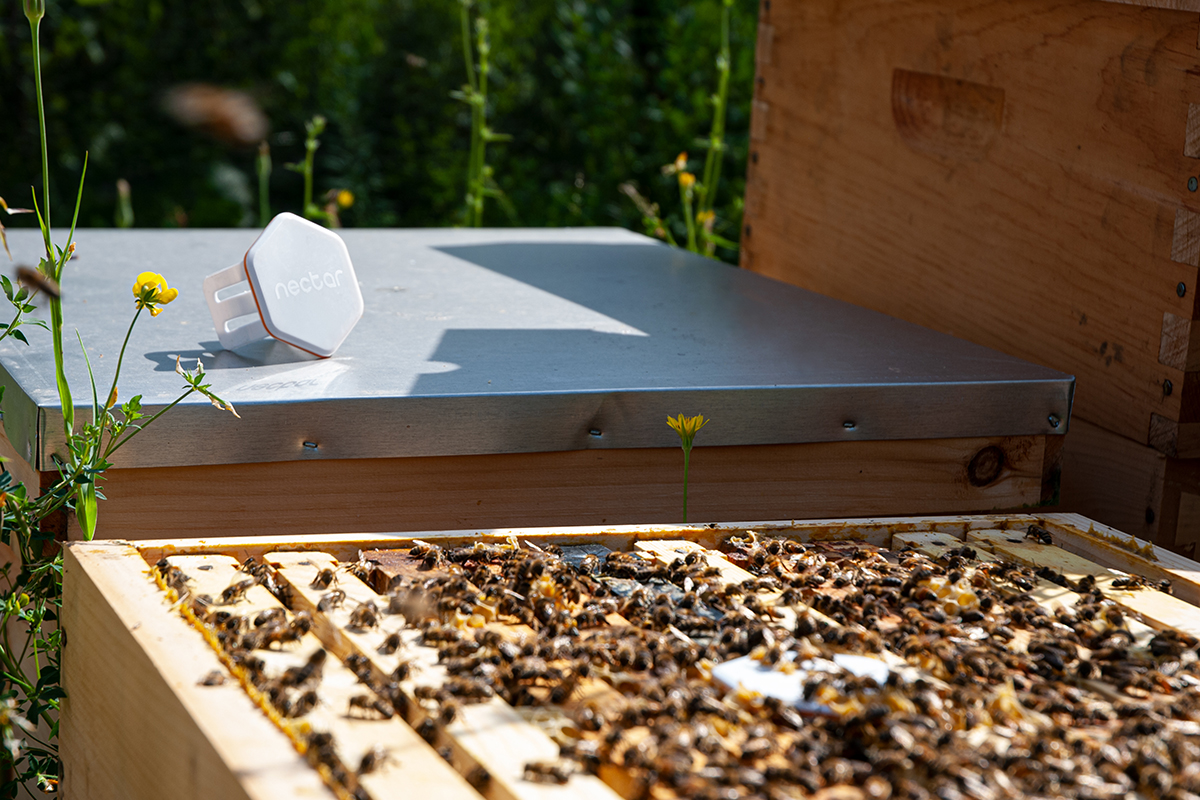 Tell us about Nectar. What exactly does this technology do?

Nectar is a precision beekeeping and pollination technology company. We strive to help commercial beekeepers combat increasing mortality rates, raise healthier honeybee colonies, and create a more resilient food supply chain. We also work with pollination-dependent growers on optimizing their pollination services and assessing their impact on biodiversity. A holistic approach is taken with both stakeholders to implement solutions for creating an agricultural system that protects the well-being of these incredibly important pollinators.

Nectar’s solution starts in the hive where it collects biologically relevant, raw data including temperature, humidity, sound and position. The data is automatically transmitted to the cloud where we use machine learning algorithms to interpret the status of the hive in terms of health, behavior and strength. The beekeeper can then access insights on the hive in order to make more informed decisions to raise the healthiest bees. For growers, we leverage the same in-hive data to help them optimize their pollination services. Using honeybees as bioindicators of the surrounding wild insects, we use the collected data to compare the impact their agricultural practices have on the health of the surrounding biodiversity. 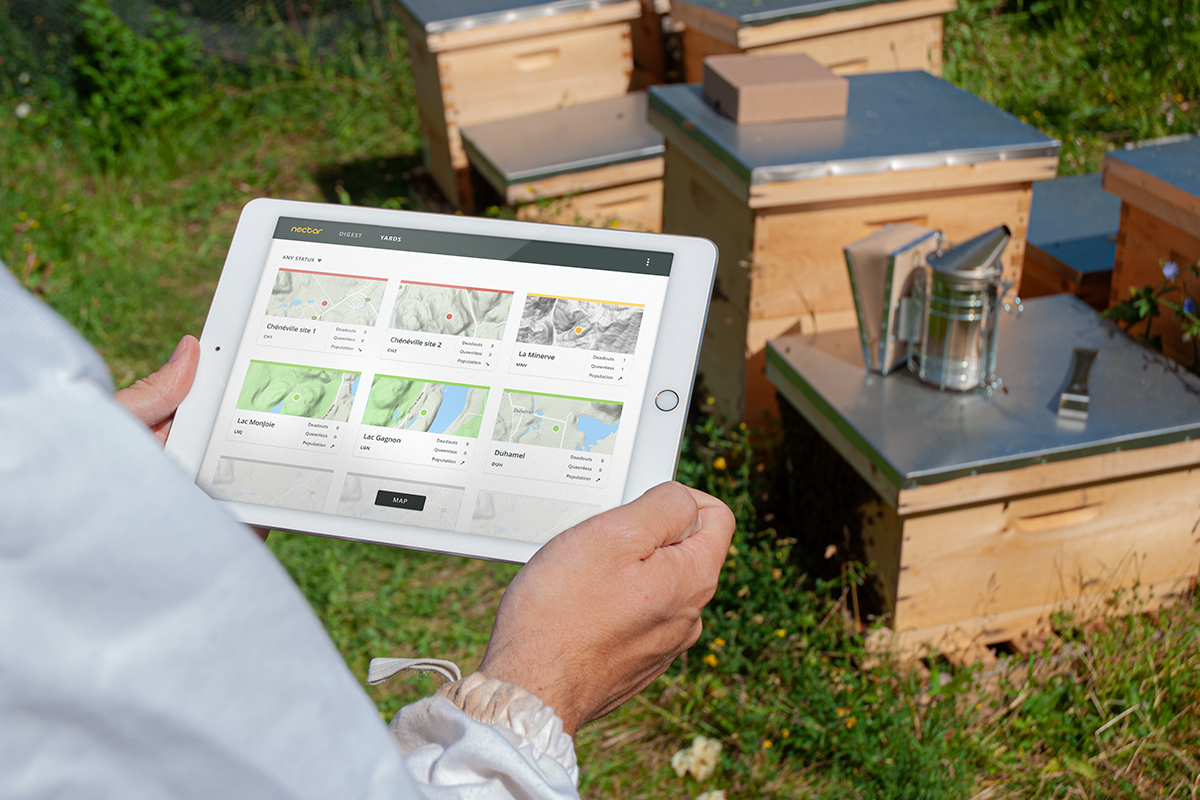 The Beecon is a wireless, bee-friendly sensor device capable of measuring the hive’s temperature, relative humidity, audio and position to assess the hive’s status. The data is then transferred to the BeeHub, a gateway device placed within the apiary. The BeeHub is responsible for receiving the data of nearby Beecons and transmitting hive data online using local cellular services. The BeeTag is the visual representation of the colony. It gets paired with the Beecon and placed on the outside of the hive for the beekeeper to easily locate a problematic hive. 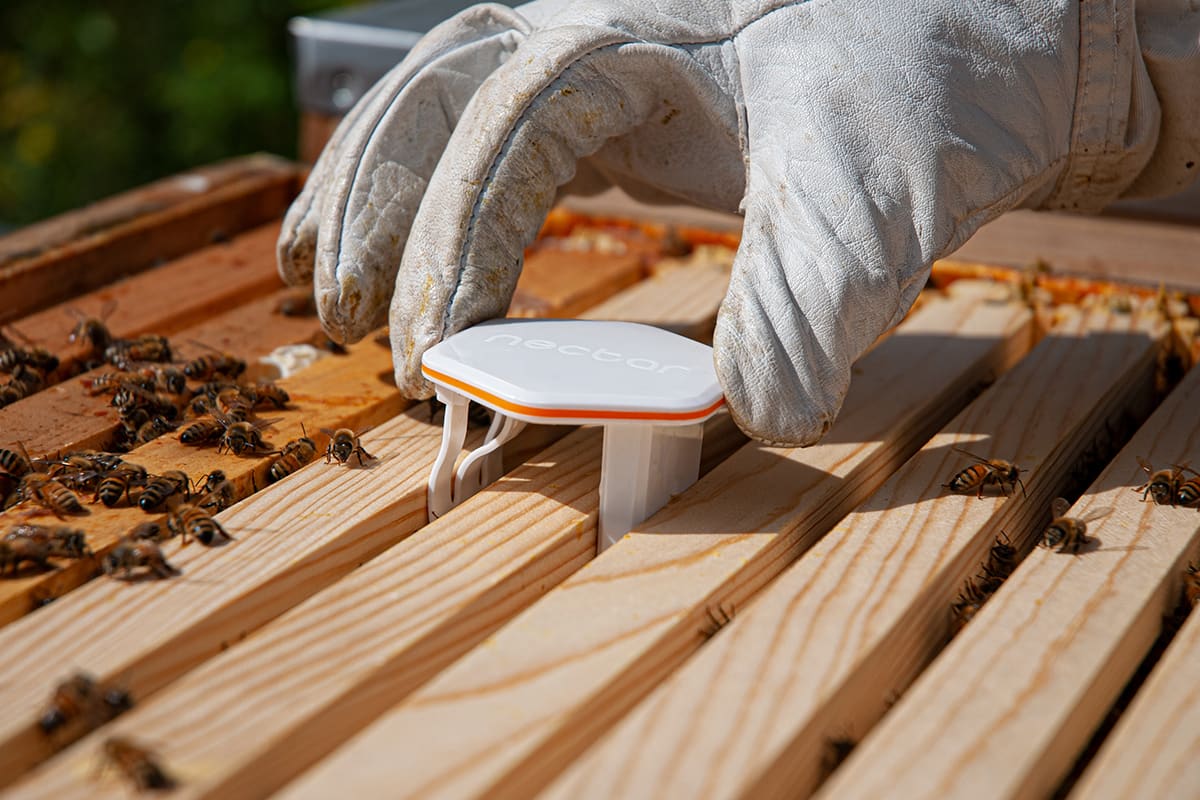 Has Nectar launched yet? If not, when will it be available?

Nectar has launched field trials with select commercial beekeepers across North America. Our partners share our vision for monitoring every hive in the future in order to maximize hive health. Together, we are moving towards a new system of managing each colony based on its specific requirements, as opposed to the current system of managing all hives the same way to maximize efficiency.

Given that our partners sometimes have tens of thousands of hives spread across multiple regions, we are focused on a diligent rollout that ensures they can scale our solution across their entire workflow. We still have space for a few more partners for our 2020 field trials should any commercial beekeepers want to join! 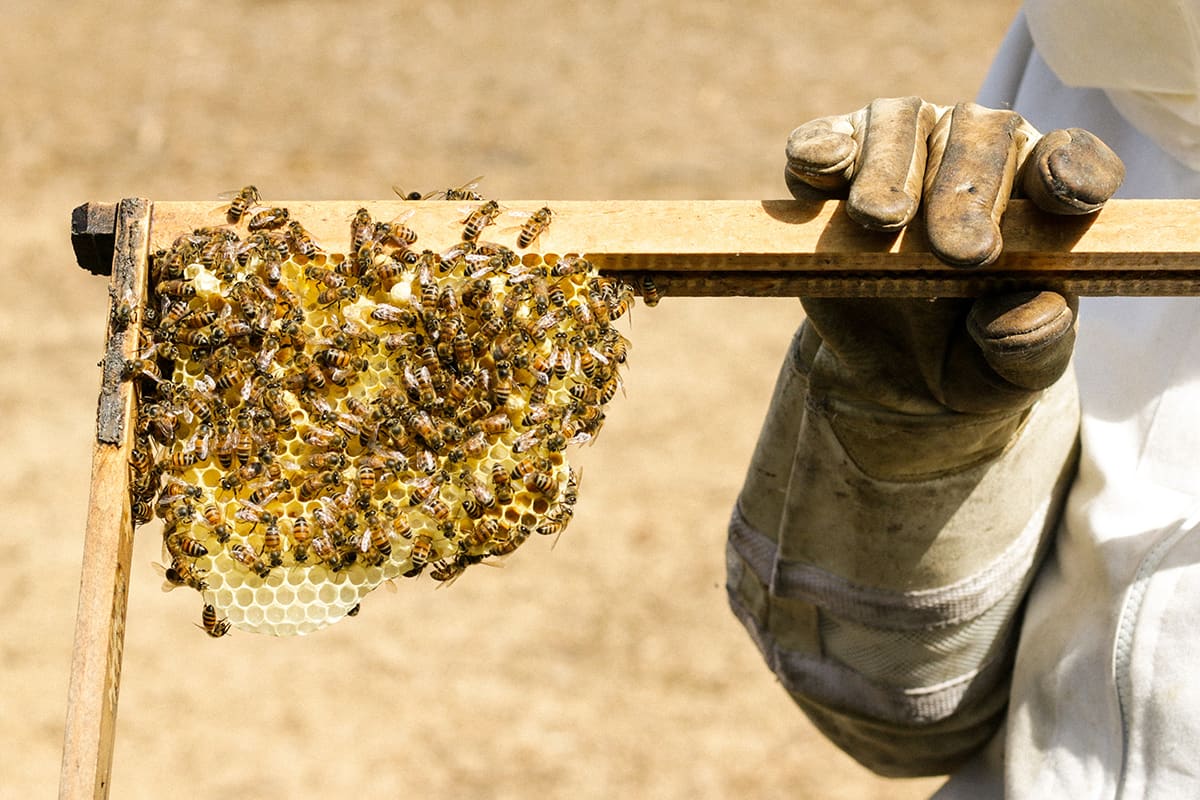 Why is it crucial to detect whether or not a queen is present and how does Nectar do this?

Queens are the lifeline of the colony. They are the only bee in the hive that is able to lay eggs. Without a queen, a colony will stop regenerating its population and will die. Most beekeepers will requeen a colony if they find it is queenless. However, it can sometimes take weeks before the beekeeper visits the hive, at which point it might be too late. With Nectar’s queen status tool, a beekeeper can act quicker and give the hive its best chance of survival.

Nectar is able to detect whether the queen is present in the hive by interpreting the fluctuations in raw data collected with our Beecon sensors. When the queen is laying eggs, she releases pheromones that induce the worker bees to thermoregulate the hive, thus ensuring that the brood has an adequate environment to develop. When the queen stops laying eggs, the worker bees are no longer induced to thermoregulate the hive, and the internal sound dynamics change as a result. Nectar can detect these changes in temperature and sound very fast to determine if the hive is queenless. 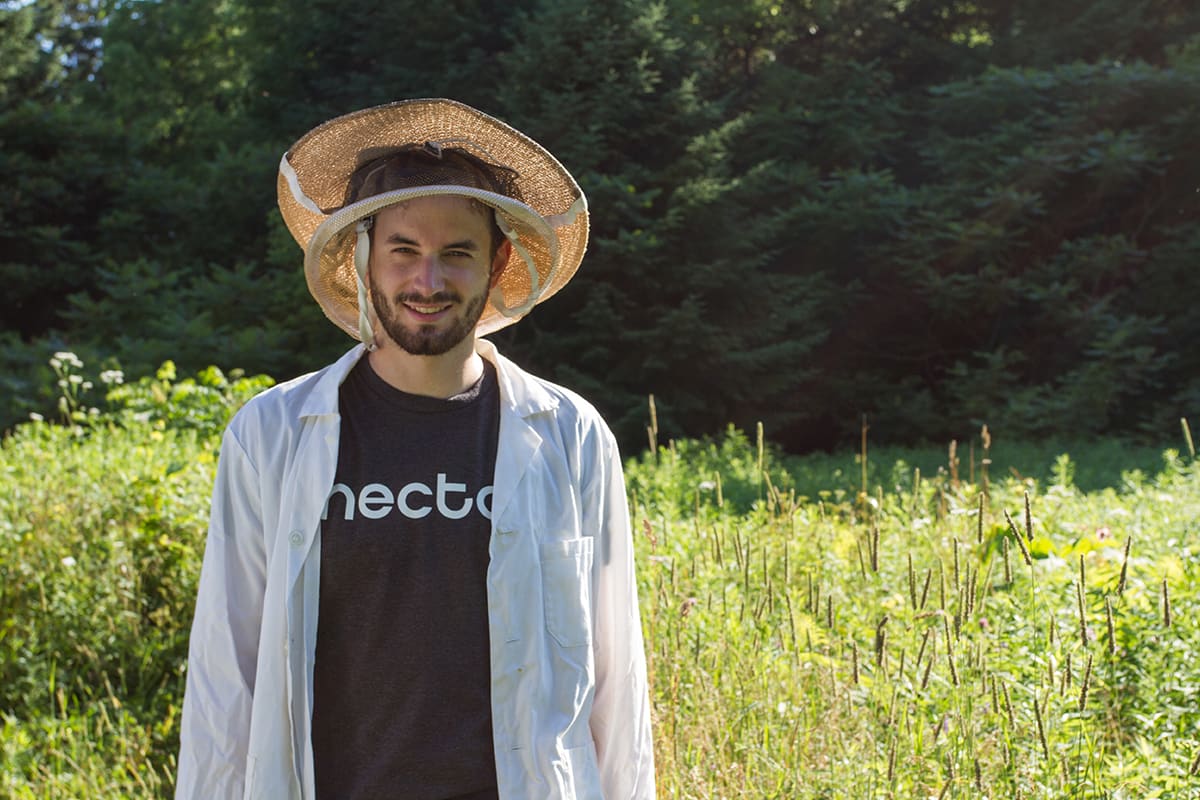 How is a queen replaced?

Typically, if the beekeeper notices that the hive is queenless fast enough, they will introduce a new queen which they’ve purchased from a queen breeder or raised themselves. Most of the time, the hive will accept the new queen, and the hive will be restored. The colony might also try to requeen itself, but it’s a risky process that takes time. Even if the colony succeeds at replacing its lost queen, it might be too weak to survive the season, let alone be productive for the beekeeper. 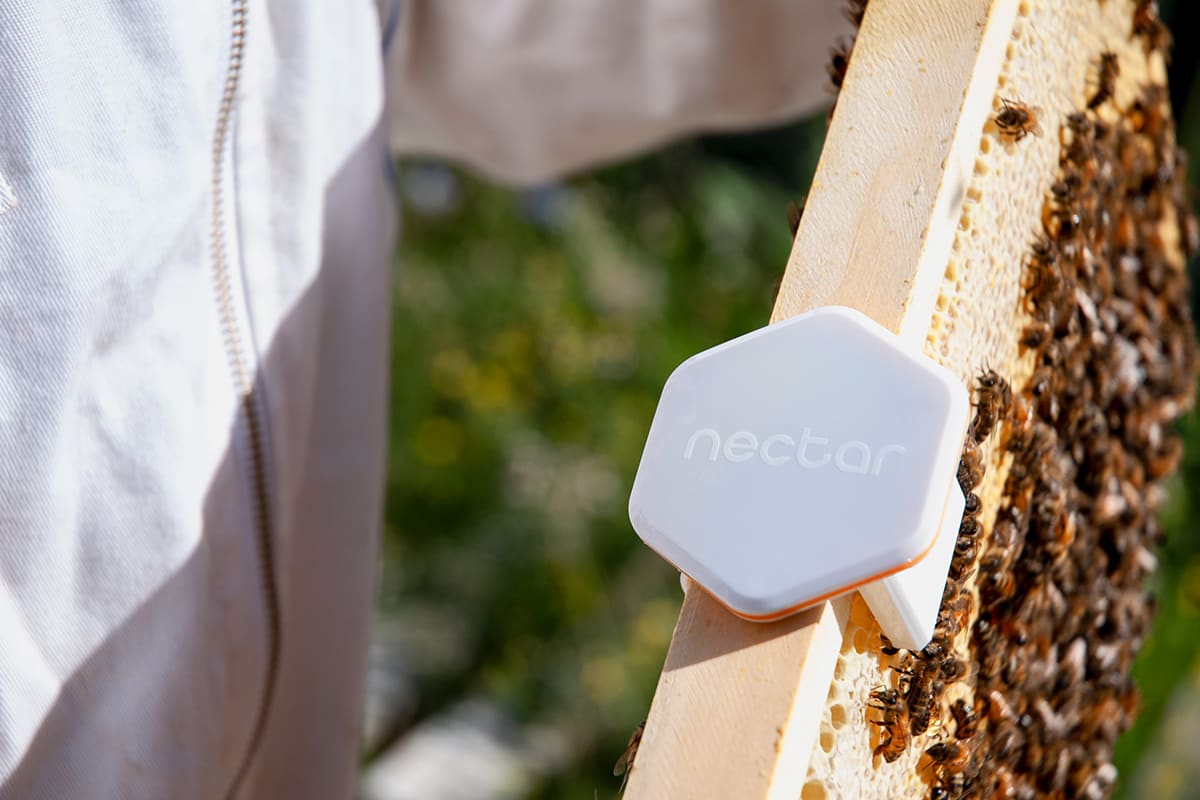 What are some factors that cause higher mortality rates within a hive?

A combination of factors are leading to the high honeybee mortality rates seen in recent years. Those include parasites, pathogens, pesticides and poor nutrition as well as human impact and climate change affecting the lack of forage, notably in conventional agriculture. Given the complexity of data collection in commercial beekeeping, it is very difficult for a commercial beekeeper to deduce with a high level of certainty what could have been done to lower mortality rates. Nectar is working to help beekeepers better interpret and address the different factors that can affect the health of their bees. 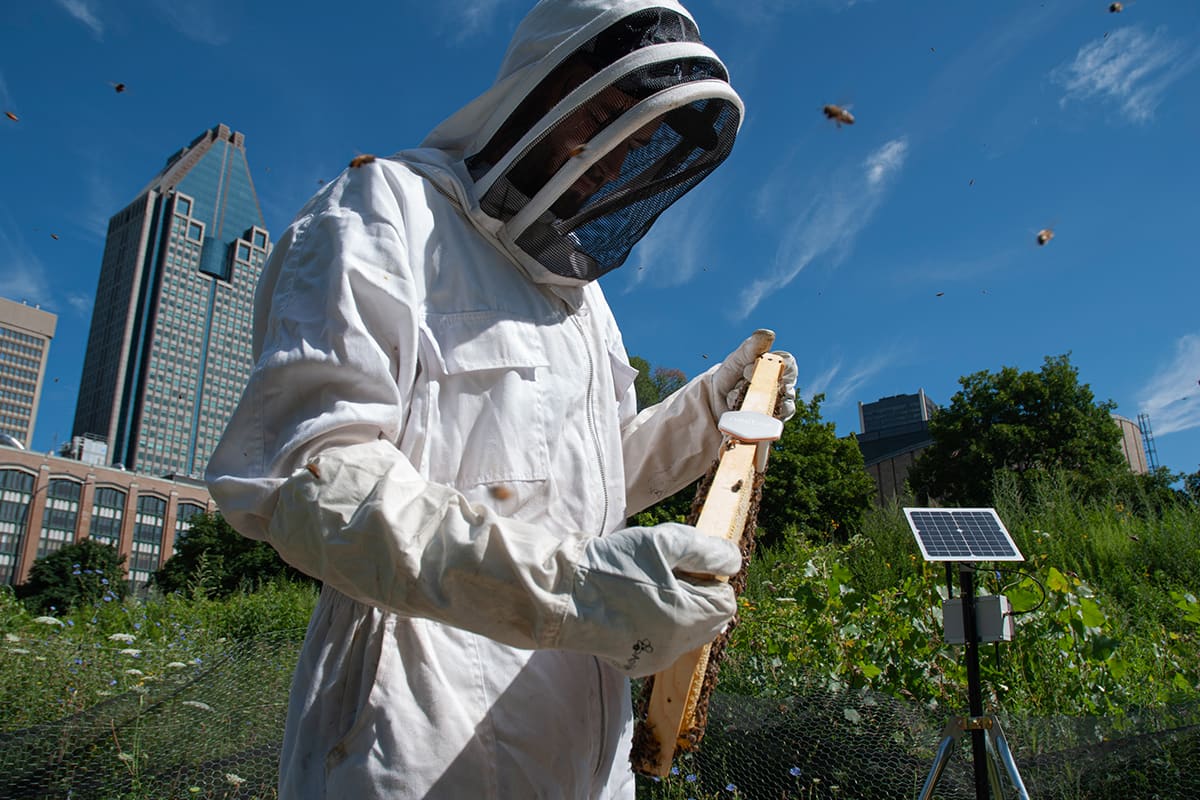 What are the most common challenges faced by beekeepers?

Research demonstrates that insect decline may lead to the extinction of 40% of the world’s insect species over the next few decades. With wild pollinators disappearing, the demand for managed honeybee pollination has dramatically increased in the past 15 years. Honeybees are not immune to the challenges faced by their wild pollinator peers. Approximately 40% of American beehives die each year, up from a historic average of 15%. Raising honeybees is increasingly more expensive as they require additional inputs to cope with an increasingly hostile environment.

Beekeepers are heavily relying on labor to inspect their hives, treat sick bees and feed bees that don’t have adequate nutrition available to them in the environment. As such, labor and input costs have skyrocketed. And to make matters more complicated, honey adulteration has become an increasing issue. Fake honey is much cheaper than the good stuff. This is forcing beekeepers to accept lower prices for their real honey, thus reducing profitability. 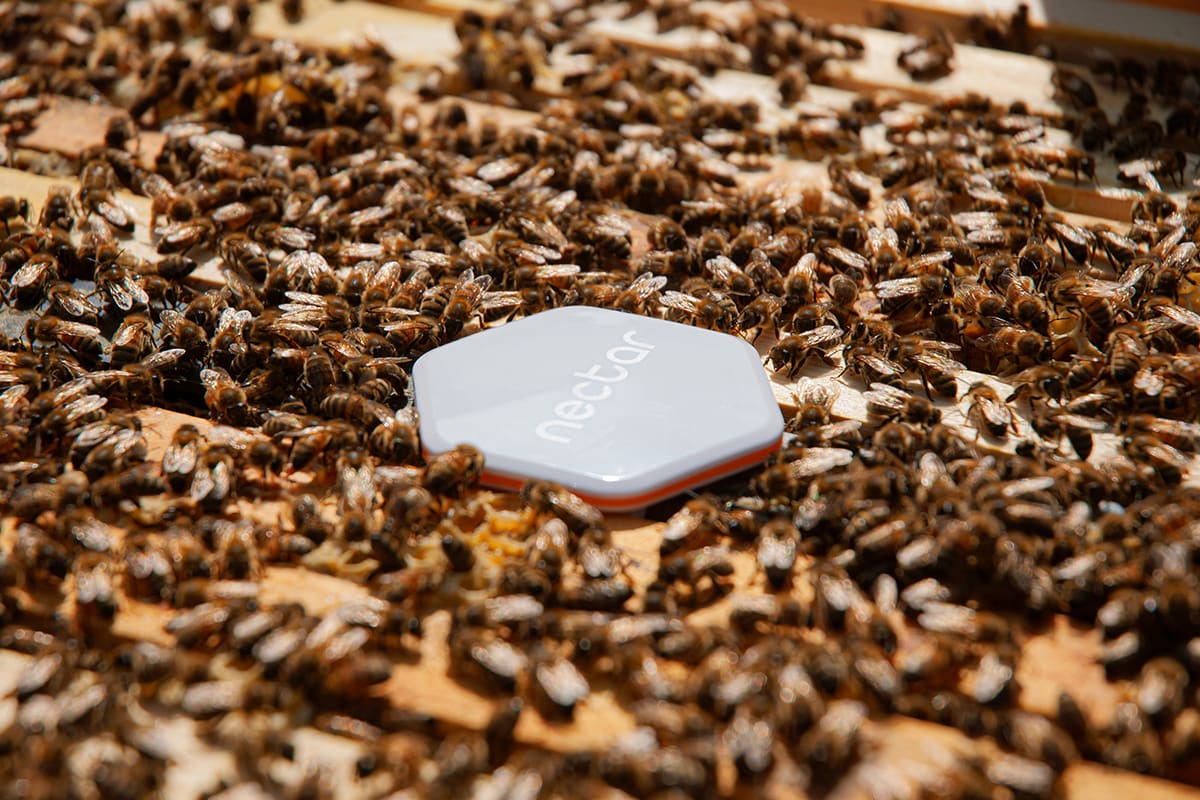 Why are bees such an important part of our ecosystem?

Bees are responsible for pollinating one in every three bites of food we eat. Honeybees, while not native to North America, are the most efficient domesticated pollinator. They are vital in the production of many of our favorite crops including almonds, apples, blueberries, cherries, avocados and more.

Beyond the beekeeping industry, honeybees are considered to be bioindicators of their surrounding biodiversity. They are a bit like the canary in the mine. Using technology to monitor managed honeybees is an incredible opportunity to monitor the health of non-managed species such as wild bees, butterflies and other insects that would be impossible to track otherwise. We believe that this dataset can empower the industry to drive change in agricultural practices in order to build a resilient food system where biodiversity is considered an essential factor in feeding our planet. 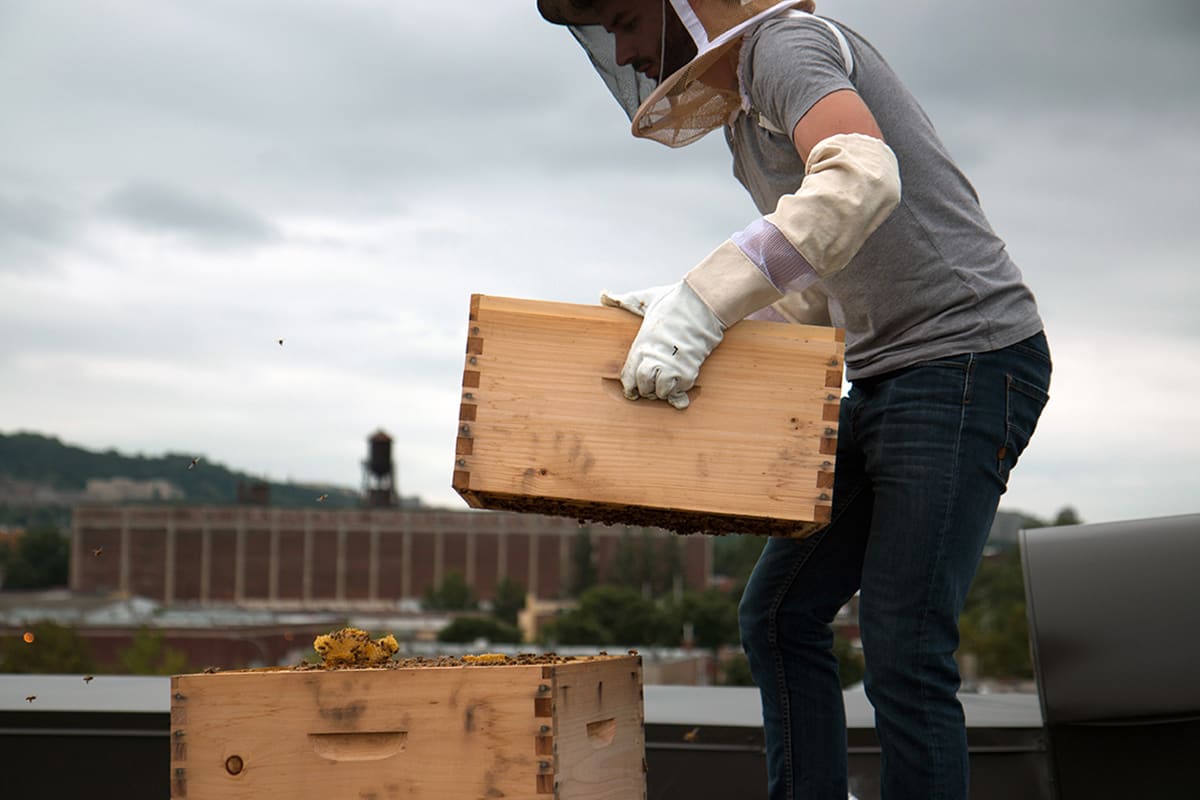 What is one thing most people might not know about bees?

Drones (male honeybees) do not have fathers. Their entire genetic makeup comes from their mother. But they do have grandfathers! Worker bees (the females in the hive) have fathers. They derive their genetics from both mother and father. 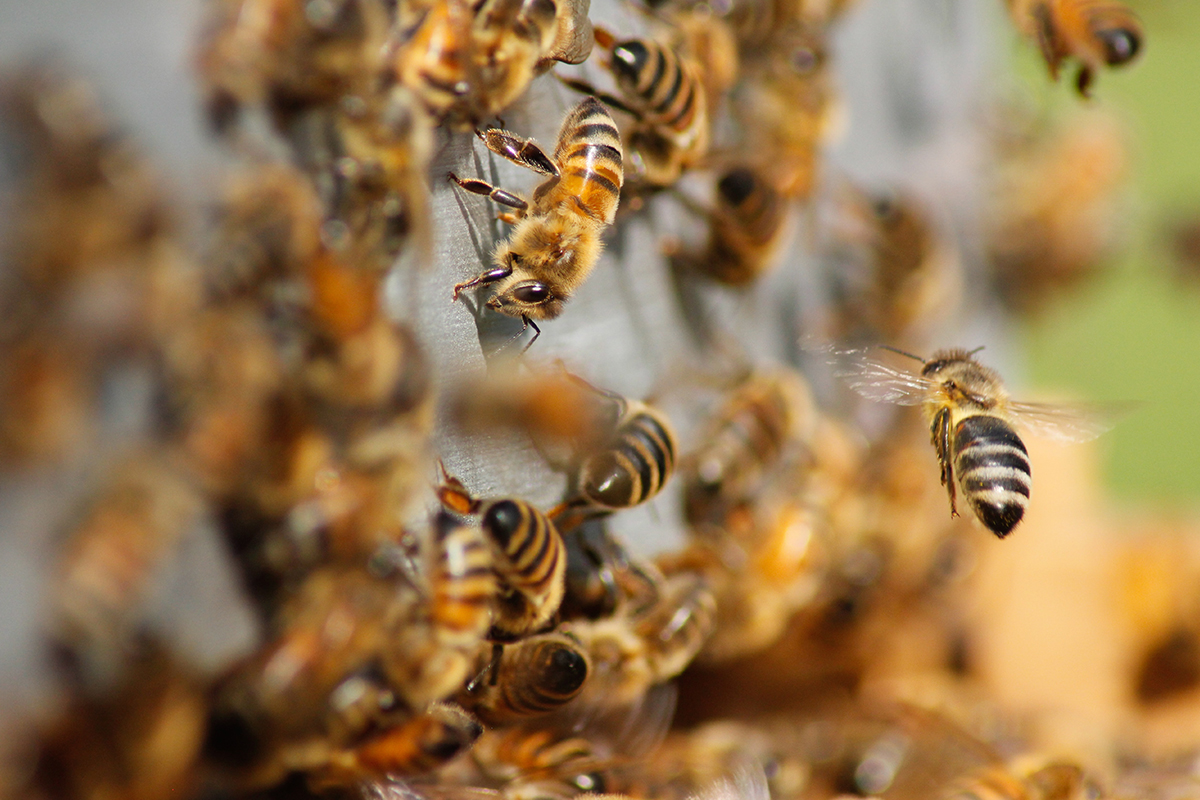 Any advice for amateur beekeepers just starting out?

Take a class! You are raising a complex organism and you should be equipped with all the right knowledge when getting started.

Find out more or adjust your settings.