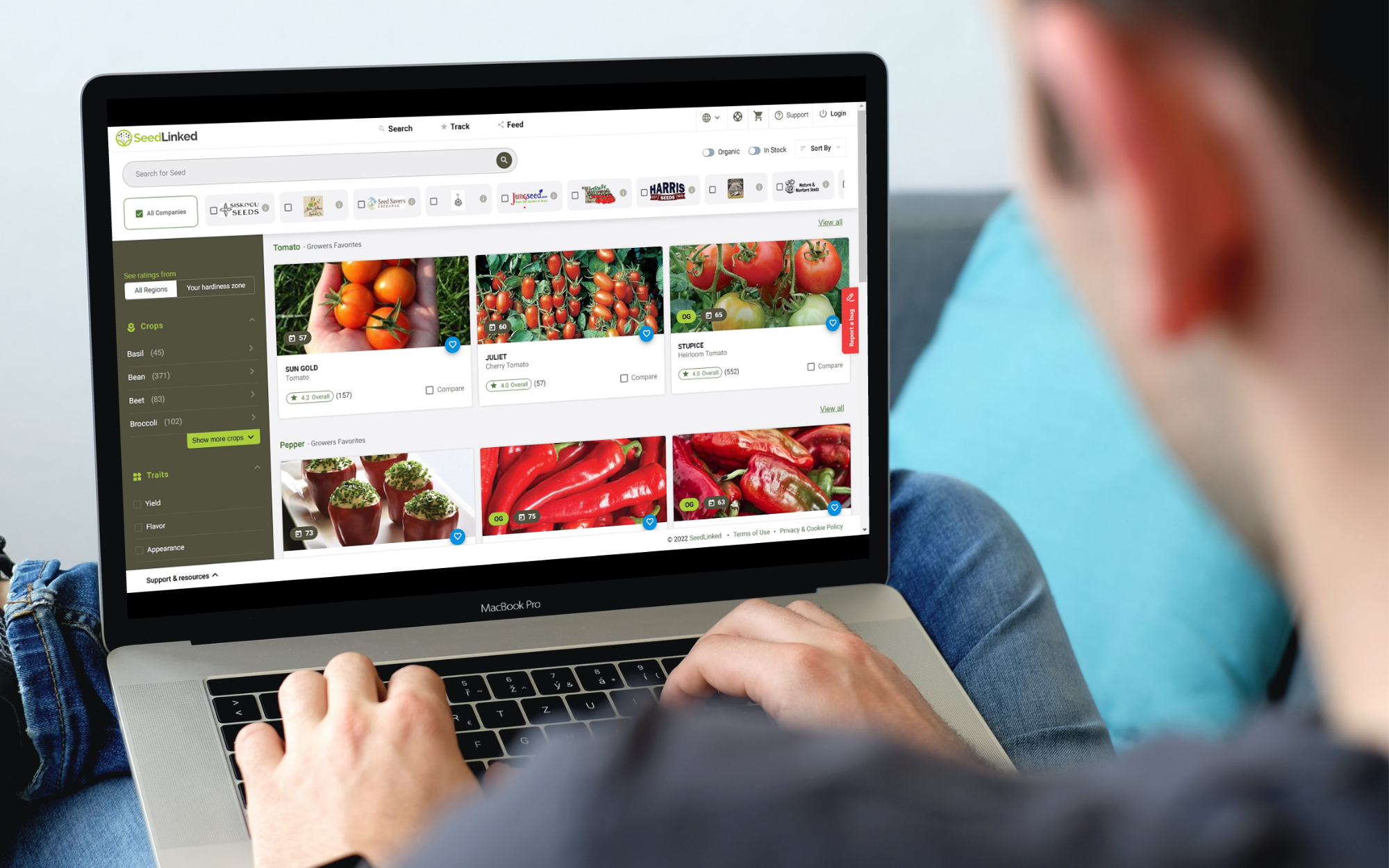 Building a Digital Community of Growers

SeedLinked is an agtech platform that aims to decentralize the seed system and increase transparency by connecting seed companies and growers with crowdsourced data on thousands of crop varieties.

SeedLinked is an agtech platform that aims to decentralize the seed system and increase transparency by connecting seed companies and growers with crowdsourced data on thousands of crop varieties. 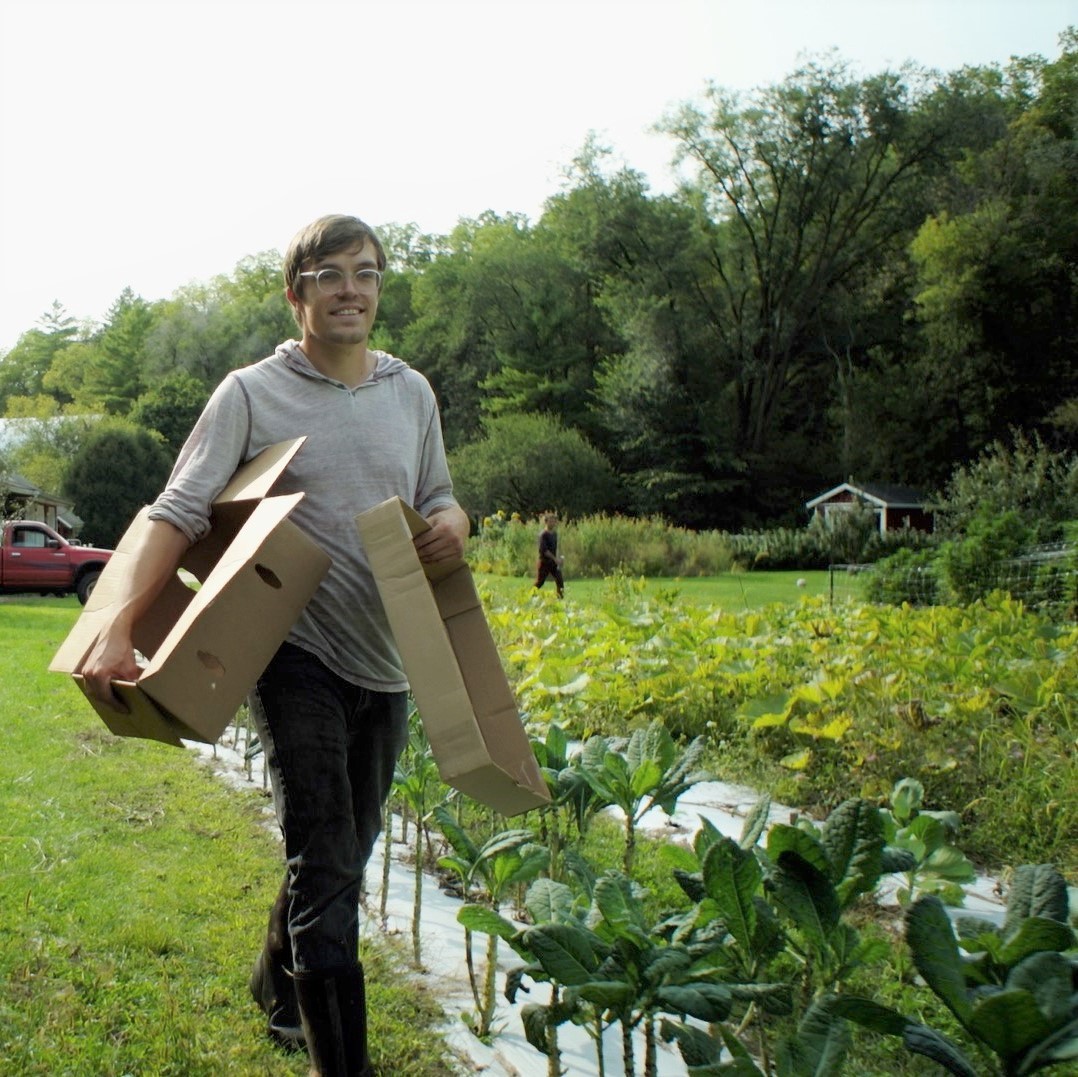 As our climate changes, so does the demand on seeds. A tomato seed that once thrived in California, for example, may no longer find itself in ideal conditions. Or a reliable seed company might stop offering a beloved squash. Adaptations must be made, but the research needed is both expensive and time consuming for already over-extended growers. This is where SeedLinked comes in. They unite plant breeders, seed companies, and growers via their website and mobile apps which provide crowdsourced data on thousands of seed varieties. Members rate yield, flavor, disease resistance, and appearance as well as share information on availability and new breeds. When growers share data on trials they’ve run, it helps others decide what might work for them, and gives seed companies and breeders some insight on the current market trends. SeedLinked has conducted more than 580 collaborative variety trials thus far and features more than 1,400 vegetable varieties across forty plus crops. With so much diversity, growers easily learn about new varieties that might be better suited to their needs. And you don’t have to be a farmer to participate; those tending a backyard or windowsill garden are welcome! As Co-Founder Dylan Bruce says, “A decentralized seed system isn’t only good for climate resilience; it also means we can better meet the needs of unique cultural food crops.”

What inspired you to start SeedLinked?
SeedLinked was founded to bring transparency and the power of technology to the seed system, particularly for vegetable crops that lack the same attention as commodities. Over 70% of global food is produced by more than 500 million small farmers—and gardeners are also an important part of food security—but the seed industry focuses largely on mega-growers in just a few isolated production regions. Our platform makes the seed system more resilient by boosting local adaptation and making sure growers can access the best seed for their needs. A resilient seed system is a necessary underpinning of a sustainable food system.

SeedLinked believes in the imprint of place. Can you tell us more about this?
The best tomato to grow in the Hudson Valley in New York will be different than the best tomato for Los Angeles, yet there is surprisingly little transparency into how a given variety was bred or where it performs well. Most growers just take the seed company at their word and base their seed decisions on images and written descriptions in a seed catalog. There is no centralized place to access performance data based on the growing zone. At SeedLinked, we have characterized over 1,400 varieties for productivity and flavor traits with a network of over 6,000 grower-reviewers across North America, which allows growers to make data-driven seed decisions.

Trialing varieties in different locations is one of the main bottlenecks in breeding programs. Our technology makes trialing quick and affordable, and the data is more reliable for year-over-year and actual farm performance than traditional variety trialing models, so growers can be confident in their seed choices, and plant breeders and seed companies take on less risk.

Why is it important to know where the plant parents of each seed were grown?
The conditions a plant was bred in influence how it performs once it gets to farmers and gardeners. A tomato variety bred to produce well in California’s Central Valley will usually lack the suite of traits that would make it reliable for the rainy Midwest—perhaps it doesn’t have the right disease resistances, or cracks from all the rain. Similarly, a variety bred under intensive chemical management (with all the fertilizer and pesticides it could ever want) may perform poorly in organic or low-input conditions, making it less adaptable to sustainable production.

How involved is SeedLinked in tracing the historical origin of seeds?
We’re not very involved in this side of things yet. We see ourselves not as keepers of the historical seed story, but as facilitators of the developing and ongoing seed story, recording the now and informing the future.

Based on trials and customer feedback so far, how has SeedLinked helped growers face challenges?
There’s no other data and service like what we have provided. Growers can use our seed marketplace to look at over 1,400 fully characterized varieties. With twelve seed companies selling through the platform, we have 4,000+ varieties available. This is the first time that a grower can compare offerings and purchase from multiple seed companies on one site, and our crowd-sourced reviews help growers make that choice confidently.

Our variety trialing services and software has also become a cornerstone of some seed companies’ commercialization processes. There is an explosion in the number of small and independent seed companies right now, but they lack the tools and resources and data to live up to their full potential. We are bringing those tools and data to them in an accessible way.

How has the seed market become more centralized and in what ways does it impact the food we eat?
Since the 1970s, there has been an ongoing and drastic consolidation of the seed industry. Hundreds of companies had consolidated into the ‘Big 6’ by the late ’90s, and by 2018, those six had consolidated down to just three (none of which are headquartered in North America). Historically, seed companies have pushed to offer fewer crops, fewer varieties, and adapted what they do offer to their largest markets and customers. We’ve lost over 95% of agricultural diversity in the last 70 years, making agriculture less resilient to a changing climate. Ultimately, these seed companies seek greater and greater economies of scale. The needs of most of the world’s growers who actually produce our food (those 500 million smallholder farmers) largely fall between the cracks with that approach. Rather than broad adaptation, we need hyperlocal adaptation, and decentralized seed systems that can be responsive to changing climates and consumer preferences. That means we need to start breeding in the environment they will be grown under the same management conditions. As we’ve lost diversity in agricultural landscapes, the vegetables that make it onto our plates have simplified too, but there is an opportunity in the explosion of small seed companies and interest from consumers in the story of their food, all the way back to the seed. A decentralized seed system isn’t only good for climate resilience; it also means we can better meet the needs of unique cultural food crops.

Do you have any favorite seed varieties to grow at home?
We’re biased, but we think the most fun thing to do is explore the diversity of heirlooms and new varieties by joining collaborative variety trials on SeedLinked. Sure, we have workhorse varieties we grow every year, but we love trying a bunch of new options and having a lot of diversity. I never grow less than 30 different varieties of tomatoes!

How many growers are currently part of the SeedLinked community and are actively participating in variety reviews?
SeedLinked is currently used in twelve countries and has been translated into five different languages on our online platform and Android/iOS apps. We work with seed companies, universities, extension agents, and nonprofits all over the world to manage variety trials. There are currently 6,200 grower-reviewers and counting. We encourage readers to sign up and join collaborative variety trials next year! Our biggest trials are in the range of 200 participants.

What’s been the biggest surprise for you in doing this work?
On the positive side, we’ve been blown away by the amount of interest internationally especially when it comes to the movers and shakers of the international organic seed movement. We’ve been inspired by their vision for how SeedLinked can democratize and decentralize the seed system to enable socially and environmentally sustainable agriculture. On the negative side, we thought the power and affordability of our trialing model would be a no-brainer for seed companies, but we’ve been surprised at how hard it is to innovate for some companies. Many seed companies are very entrenched in their systems and the traditional models.

What are your greatest concerns about the future of seeds?
There is so much energy and enthusiasm right now to change the seed system for the better. There are many small and independent seed companies emerging, and growers and consumers are starting to care more about the story behind their seed. My greatest worry is that the wave of innovation will crest without breaking the barrier into the mainstream to really make an impact on the global seed system. That’s why we’re striving to provide tools and a framework to enable those innovators to do their best work so that the plant breeders can focus on breeding and not trialing; small seed companies can refine their offerings and reach new audiences; and growers can plant the very best seed for their gardens and farms—and purchase it from a supplier that matches their ethics and cares about their success.

What else would you like to share?
Our seed marketplace is the culmination of all our variety trialing work in North America. It’s where growers can make use of the 130,000+ insights that thousands of reviewers have contributed. With a dozen seed suppliers on one site for the first time, growers can truly unlock the best seed for them. There are super useful filters to see what performs best for different traits, the in-stock seed across companies, and certified organic seed.

Something to Buzz About